The Town Hall Square: Blackheads House & The Museum of The Occupation 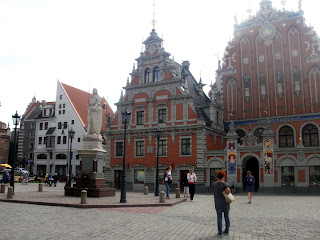 The Town Hall square and Blackheads House you will eventually find on your walk through The Old Town. And you don’t want to miss it because that’s what you see on postcards from Riga. You need to make your own picture at this place.
With stalls, workshops and various feasts The Town Hall Square used to be the centre of public life during The Middle Ages. Historians consider that initially it was a market place, but after expansion of the city in 1211 the Town Hall square was formed here. Punishments were executed and pageants used to be arranged here as well. During World War II the luxurious development of Town Hall Square was completely destroyed. Thanks to grand reconstruction works in this century the main buildings - the Town Hall and Blackheads House - have been restored. In the centre of the square you can see a figure of Roland which is a symbol of judicial power, freedom and independence of many European cities.

The Blackheads House built in 1344, is a stunning example of gothic architecture. The original house was the headquarters of unmarried local merchants, known as the Blackheads.


In this square you will aslo find The Museum of the Occupation of Latvia housed in a black communist-era building - .detailing events of Latvia's recent history, from the World War II occupations to the events of independence in 1991, the museum is definitely worth a visit, in order to gain a clearer understanding of Latvia. Opening hours: Tue-Sun 11:00-17:00 (Jan – Apr and Oct - Dec); Tue-Sun 11:00 – 18:00 (May – Sep) Admission: Free

Similar posts: The Bastion Hill, See Riga From Hight of Birds, The Highest TV Tower in EU, The Freedom Monument, Wonders of Art Nouveau, The Old Town - Heart of Riga