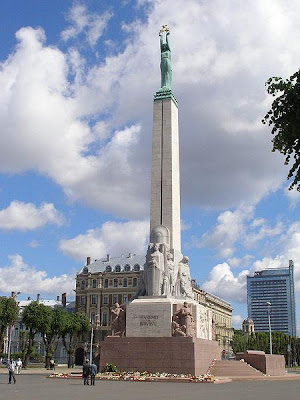 Every morning I see the Freedom Monument – it’s on my way to work. If I’m there at the same time when soldiers – guards of freedom are just arriving, I know that I still have some minutes, if they are already standing next to the monument – I’m late for work. Every morning there are some people watching and taking pictures of how the guards are coming to their place next to this monument where they stay till evening  - 5PM.  It’s at 10 AM when they’re coming.
This monument is dedicated "To Fatherland and Freedom". The 42 meter high monument is topped by a Liberty Statue - a woman with three stars symbolizing regional parts of Latvia: Kurzeme, Vidzeme and Latgale. At the base of the monument are several sculptural groups symbolizing different values - Labor, Strength of the Nation, Spiritual Strength, Freedom, Family. On the lowest block you can read historical events. The Monument was executed by Kārlis Zāle (1888-1942), a well-known Latvian sculptor. The Freedom Monument was erected in 1935 during the first period of Latvian independence between 1918 and 1940.

Today there are soo many flowers next to the monument! 4th of May - The Declaration „On the Restoration of Independence of the Republic of Latvia” – yesterday it was a holiday and people have made there the shape of Latvia from flowers.

During the Soviet era, a running joke, not completely untrue, was that the monument was a travel agency, because anyone who dared place flowers at its base got a free, one-way ticket to Siberia... Our Freedom is really something important for us and the Freedom monument is something what we really respect. It’s placed at the beginning of the Freedom street – Brīvības iela, near the Bastion Hill, Opera house, in front of The Old Town. 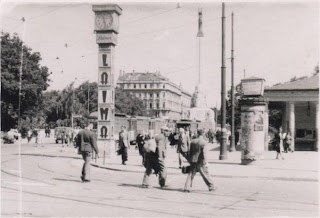 Next to the Freedom monument (closer to the Old Town) is the most popular  place for lovers where to meet  - „Laima” clock. Laima is a name of a girl, also the name of one of gods in Latvian mythology, but in this case – chocolate. „Laima” factory is producing the best Latvian chocolate. The clock was built on 1924 to make sure that Rigans are not late for work... :)
Posted by Kristine F. at 5:18 PM