The Bastion Hill – Have Some Rest in The Centre of Riga 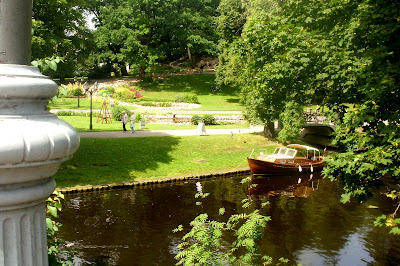 If you are in Riga I’m sure you will see the Bastion Hill near the 42 metres high Freedom Monument , in front of the Opera House. Bastejkalns (Bastion Hill), Riga's second highest hill at a towering 16m (52ft) above sea level, was created from 1857 to 1859 to replace the old defensive sand bulwark. With the removal of the earth fortifications, a new period in the development of Riga set in. The former defensive moat became a winding city canal. 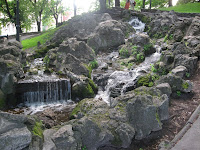 The first plantings in the area were performed by A.Vendt, an engineer from Luebeck. The gardener Reims continued planting from 1863 to the autumn of 1879. From 1880, when the Town Council established a Garden Committee under the guidance of G. Kuphalt, the vegetation was considerably remade taking into account developing traffic. Higher demands were set for the art of gardens. Stone embankments with small cascades and waterfalls were arranged here to resemble a mountain river in accordance with G. Kuphalt’s design in 1888.

Several paths lead to the top, which provides excellent views of the surrounding sights in the winter months.. Cannons, limestone busts and other curiosities recovered from damaged buildings following World War II were embedded in its walls for posterity. Within its precincts are memorial stones to five people killed by Soviet bullets during the January 1991 disturbances. Among the dead were camera operators documenting the stormy events... Romantic paths, bridges, sculptures... Sometimes cultural events are taking the place here. Perfect place to get rested during the summer in a green grass  -in shadows of hundred-year-old trees.

The Lost World Cemetery with The Soul
The Art in Stone: Mysterious Easter Island in Riga
See Riga from Hight of Birds
The Highest TV Tower in EU
Posted by Kristine F. at 10:35 AM