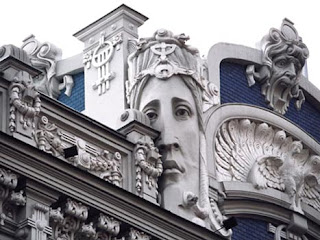 It would be a sin not to write about Art Nouveau in Riga, because Riga boasts the largest collection of Art Nouveau buildings in Europe. Art Nouveau makes Riga to be a little wonderland – this architecture is unsurpassable.
The architectural and artistic answer to the literary Modernist movement that began in the late 19th century was the Art Nouveau movement in Europe. The Art Nouveau movement reached its peak in the early 20th century, which is when the majority of Riga’s Art Nouveau houses were built. Riga’s term for the movement, Jugendstil, comes from the German and Scandinavian movement named after the avant-garde periodical Jugend (“Youth”). Unlike the stiffer sensibilities of Victorian style, Art Nouveau stressed a complete creative freedom, mixing fantastic elements with a tendency to show all utilitarian construction elements as artistic value, with very characteristic elements such as dynamic, undulating, and flowing lines and geometrical ornaments. 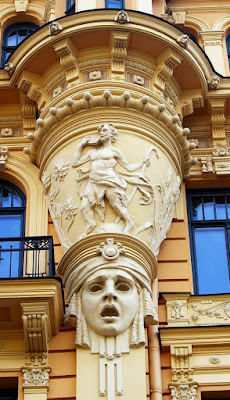 Riga is one of the largest centres of Art Nouveau, with more than a third of the buildings of its Central District built in the style; other significant centres include Paris, Barcelona, Berlin, Vienna, Krakow, Moscow and St. Petersburg, among others. The main street for Riga’s Art Nouveau architecture is Elizabetes street, which intersects Brivibas Boulevard. In addition to Elizabetes Street, Alberta and Strelnieku Streets also feature impressive examples of the style. In total, there are over 800 Art Nouveau buildings in Riga.
Riga Art Noveau centre can help you. Here you will find the information about architects, maps and routes: http://www.jugendstils.riga.lv/eng/turisms Of course, you are welcome to visit Art Nouveau museum!
Posted by Kristine F. at 12:17 PM