The highest TV Tower in EU

Towers are a manifestation of the dream of ancient civilisations to get closer to the sky.  Millions of people visit towers to enjoy their unusual panoramas and to experience the feeling of being ‘up there’. Riga’s contemporary silhouette is not imaginable without the radio and television tower at Zaķusala, which differs to other standard towers through its individuality and expressiveness.  However, this is not just a building which symbolises Rīga, but is also a technical structure which has to perform specific functions —  to broadcast radio and television programmes, and provide electronic communications services.   The 368 metre high tower in Riga is the tallest in the European Union.

In late 1972, M. Shkud, the chief engineer of the All-Union Planning Institute of the USSR Ministry of Communications, and the chief expert I. Ostrovsky visited Rīga to provide advice on the construction of the tower, they aslo emphasised that television towers were no longer built solely as technical buildings, but also as tourist attractions with an observation deck and restaurant.  They insisted that it should be located in the centre of Rīga, and the most appropriate place, to their minds, was on an island in the centre of the city which they had seen driving from the airport.   The next stage involved deciding on a design for the tower.  The author of the visual design is the Georgian architect K. Nikurdze.  At that time very similar reinforced concrete towers were being built in many other places — in Lithuania, Estonia, Moscow and Berlin, with the only difference being the top section.  K. Nikurdze considered that the tower should be built from steel, in this way gaining a more impressive look.

The Rīga radio and television station at Zaķusala started to transmit its first broadcasts in 1986.  The transmitter began regular transmission on Channel 28 in January 1986.  Building and assembly work continued until 1989, and work on the tower was completely finished over a ten year time span. 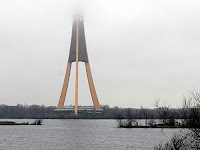 You are welcome to visit this great tower! The observation deck, which is located 97 meters above Zaķusala, is the highest publicly accessible viewing point in Riga.  From there you can easily see the city and in the right weather conditions you can see the Riga HES at Salaspils and the highest points at Sigulda, as well as the Gulf of Riga and ships in the gulf.
You can book an excursion there (around 45min) or just go there and enjoy the view. For detailed information (mission, history, services, technical information etc.) check their site: http://www.tvtornis.lv