Where VIPs from Europe had wild parties? 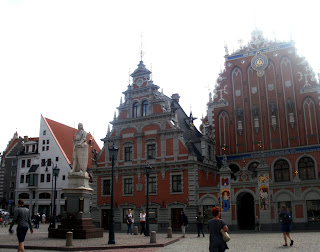 The House of Blackheads built in 1344, is a stunning example of gothic architecture. The original house was the headquarters of unmarried local merchants, known as the Blackheads. This was a place which played an important role in the society life and traditions, VIPs from all over the Europe often were guests there and not only for official meetings and cultural events... It was a place for wild secret parties of rich people! A German merchant club the Brotherhood of Blackheads existed here until the middle of XX century. On the top of the building you see blue astronomical clock, inside the building on the basement you can see the exposition about the history of the building, it’s rooms and halls are rich with golden decorations, fireplaces, furniture from 19th century, paintings, sculptures, Latvian State highest award - the Three Star Order - and the medal collection, House of Blackheads new silver collection – and even more you can see here. Rooms of the building are also rented for cultural and private events/celebrations, different concerts and exhibitions are organized here.
Address: Rātslaukums 7, Riga, LV-1050
Opening hours: Monday – closed, Tu – Su 10.00 – 17.00 (May 1 – September 30)
and11.00 - 17.00 (October 1–April 30). During the cultural events part of the house is closed or not available for visitors.
Entrance fee: 2Ls, students - 1Ls,

Read more about history of the House of Blackheads: http://www.riga.lv/EN/Channels/About_Riga/Riga_architecture/Old_Riga/MelngalvjuNams.htm
Other places to see at the Old Town:  Pictures of Riga Old Town I, The Town Hall Square
Posted by Kristine F. at 12:25 AM