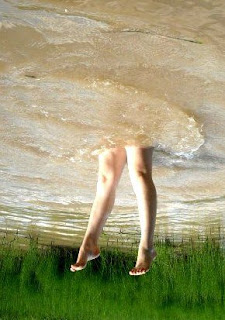 Checking what's on my computer I found this list of exceptional experiences in Latvia that was made many months ago for some other website... But it never got published anywhere, so I'm giving myself the green traffic light to share this list with you. Some adrenaline, some adventures, some childhood dreams that can become reality. Take a look at this list and let me know if there is something you can add!

1) Spending a night in a jail
In 2009 The Ghost Hunters International team announced: the Karosta jail in Liepāja is one of the most haunted places in the world. This KGB prison, where more than 150 people got shot, is one of the most unusual hotels you can find around the world. Entering this place every visitor becomes a prisoner, and staying overnight there you will get a real prisoners cell. It should be noted that this place is not recommended for emotionally sensitive people.

2) Flying with no belts, ropes or parachutes
In 1979 Jean St. Germain, Canadian-French inventor, built the first vertical wind tunnel, and last 30 years  ‘Aerodium’ in Latvia has been working to develop this invention and make flying real for any person with no special previous training. In Sigulda you can fly without safety belts and rubbers, no ropes and no parachutes – just jump into the vertical wind tunnel to enjoy adrenaline and taste of freedom.

3) Song and Dance Festival where thousands are singing like one
Since 1873 Song and Dance Festival in Latvia has been significant event which brings together more than 20 000 performers - singers and dancers in Riga – all dressed in traditional costumes from all parts of Latvia. The festival is held in summer once per 5 years taking over the streets of Riga, concert halls and even the public transport. The next festival will take place in 2018.

4) Midsummer’s Night
The pagan tradition of celebrating the summer solstice is absolutely alive in Latvia. 23rd of June people are getting to the countryside to make bonfires at night, to drink beer and jump over the fire, to decorate themselves with flowers, to sing and dance, to look for magical ferns in dark woods at night and run naked around meadows staying awake until the sunrise.

5) Park of modern arts
Pedvāle Open-Air Art Museum is the area of 200 ha full of original and surprising sculptures, installations and art objects created in workshops for specific place using mostly locally available materials. Be ready to spend your day in meadows, forests and hills on the banks of the river Abava observing wildlife and interaction between the nature and modern art where every step in the trail can bring new surprises.

6) Bobsleigh for speed lovers
1420 meters long bobsled track where high-level competitions are held is available also for non-professionals to enjoy adrenaline when bob curves down in landslides with a speed of 100kph. Accompanied by athletes, visitors can enjoy winter bob, summer bob on wheels or special tourist bobs in the track built in 1986 and regularly bringing here bobsled professionals from several countries for their trainings.

7) The Secret Soviet bunker
2000 sq m large bunker 9 m underground has been a secret since it was created in 1980-ies. It is located in Līgatne, and the veil of secrecy has been removed only in 2003. Soviet memorabilia, projections of what would happen in case of a nuclear war, telecommunication unit for communication with Moscow Kremlin and more original features you can see there now. For brave visitors there is a possibility to participate at the reality game.

8) Latvian Sauna
Traditional Latvian sauna is a real trip into the world of power of nature: right herbs and branches of trees into sauna open the world of aromas and natural healing, jumping into the water of pond or lake (even in winter) right after sweating in the temperature of up to 100° C strengthens body, and a massage with leaves and herbs (which looks more like hitting a person) removes the stress better than any spa.

9) Off-road driving with Russian military cars
Off-road park in Saldus district near the lake gives the adventure of off-road driving through forests and rivers in Russian military jeeps in the former military landfill Zante. There are special tracks for several difficulty levels, and after the training and orientation rides groups are also invited to challenge everyone's driving skills in a competition.
10) Lonely beaches and naturally blue cows
Western part of Latvia – Kurzeme offers to enjoy beautiful, quiet, lonely beaches on the Baltic Sea – for hiking, bird watching, nude swimming or being alone with the wild nature.  This part of Latvia is also the only place to see naturally blue cows. The secret of this natural color is nothing else than the water of the sea.