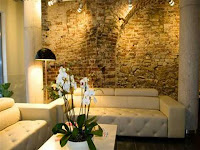 Just have discovered this cosy place – what an atmosphere there!!! And history!!! And such a beautiful view to the Old Town from there!!! And interior!!! And retro pictures on the walls!!! I have no idea how it is to live there (haven’t done it), but as a guest I felt there really good. Nice serving, smiling people... and interior... Such a nice interior...

Check out the history: the origins of the building at Teatra 10 date back to the 17th century when the successful merchant Johann Reitern built it as warehouse that quickly became known as the Elephant because of its volume and form. The entrance to the warehouse was designed as a sculptural portal with a decorative relief depicting an elephant with palm trees, rosettes and acanthus leaves. In 1909, the building was converted into a cinema called the Moulin Rouge. In the Soviet period the rooms were used as a sports complex until, in early 1990s, the building fell in. From December 2009, the fully reconstructed building began a new life as the Old City Boutique Hotel.

Pictures: Old City boutique hotel.
Web: http://www.oldcityhotel.lv/en_US/home
By the way, just heard on the radio: for New Years celebration all hotels of Riga are full.
Posted by Kristine F. at 12:20 PM